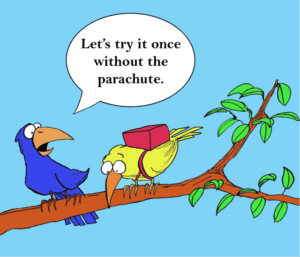 No. Both are important.

When I began sitting in David Heranney’s Certificate of Merit (now RMR) class after failing to pass the qualifier, he and the other readers were talking so fast, the words flew over my head like bullets. At first, I was only able to write a few words at a time before needing to drop. Two weeks later, I wrote furiously for about 30 seconds before dropping. David asked me to read that portion, and I got it! His grin and praise was all the inspiration I needed.

Stepping out of your comfort zone is crucial for your growth and for developing self‑confidence. Take risks, make mistakes, and your writing will improve.

For advanced students, or if you are stuck on a plateau, practice at 50+ wpm above your current speed. Writing beyond your ability will train your ears to listen for — and your mind to get accustomed to hearing — words at higher speeds.

Disregard the screaming of your brain:

This is one task where you do not need to focus on punctuation initially. Follow Golden Rule #1: Write Cleanly, Drop, Repeat. As your mind and body adjust to writing at speeds beyond your ability, start adding punctuation.

When you return to your current speed level, you will be amazed at the progress you have made and how much easier it is.

Sixteen law students participated in four mock trials over a weekend at a local law school. Two law students each represented the state and the defense. Actual assistant public defenders acted as witnesses or the judge. In one of the trials, there was a newly elected real-life judge. Since there was no designated court reporter area in the moot court, my interns sat up on the podium, next to the judge.

No transcript was being requested. As the “official” reporters of record, I emphasized to my interns that their main task was to speak up as often as needed to get the best record they could. They were both excited and nervous in the beginning.

The law students were allowed limited amounts of time for their opening statements, direct and cross-examinations, and closing arguments. As a result of the time pressure, several spoke in spurts of 300 wpm and above. The reporting students needed to speak up dozens of times.

During the trials, each reporting intern was asked to read back several times and a couple of them felt embarrassed when the judge leaned over to look at their realtime. After the trials were over, the law professor with whom I coordinated this event asked for rough drafts of one witness’ testimony for each trial.

All of the reporting students learned a great deal during and after the experience.

One student’s aha was that she realized her notes were “a hot mess.” Another student said her notes were shattered and she wrote poorly for a couple of days, but she and a third student passed the 200 wpm jury charge that week. After writing at 300+ wpm, 200 felt easy.

One of those interns wrote this testimonial after her mock trial experience:

“I have been in a court reporting program for approximately five years. I was reluctant to intern until I met Ana. I heard about her mock trial opportunities while attending the College of Marin. I decided to go for it, and I found her to be an amazing coach. She guided me through the entire process with one-on-one coaching on how to prepare rough drafts, breathing techniques, and the art of interrupting.  Also, the process helped me to build speed.  But it was due to Ana’s training that I gained the confidence to interrupt, as needed, with no hesitation. It was during a mock trial at Berkeley Law where I practiced all of these techniques. Two days later, I passed my 200 word-per-minute jury charge speed test that I had been attempting to pass for months.

I am very thankful for the opportunity I had to intern with Ana. I believe that all court reporting students could benefit from her training because she is professional, knowledgeable, and persistent.  She is a dream to work with, and it will give students the confidence they will need for the real world of court reporting.”

Was it scary? Yes.

Was it worth it? YES.

Any experience that doesn’t kill you will make you stronger!!

If you practice writing above your current speed in combination with the other four Golden Rules and incorporate these practices into your school regimen, you will feel more confident in your writing ability, which will lead you to success. 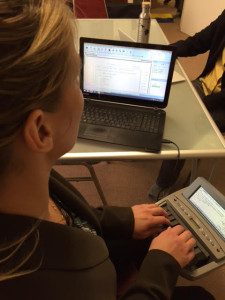 Are you ready to develop shorthand mastery and self-confidence?