Silent No More: Court Reporters Speak Up for the Record 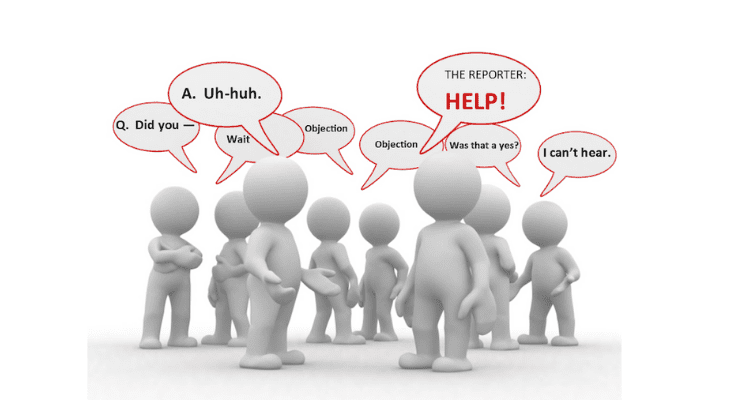 Most attorneys understand what court reporters do, treat them with respect, know how to make a good record, don’t speak too fast, and appreciate reporters who interrupt for clarification of the record.

However, some attorneys conduct depositions at supersonic speeds to “save time,” speak at 300-plus words per minute (wpm), and expect reporters to remain silent. Capturing every syllable all day long—not just getting the gist— is stressful enough, but it’s unreportable at those speeds.

Fast-talking attorneys who get annoyed at reporters that interrupt and think they are incompetent have unrealistic expectations that reporters should be able to report garbled speech, dropped words, difficult accents, and people talking simultaneously— which neither artificial intelligence (AI) nor advanced audio equipment can capture accurately.

As I wrote in my 2015 article, The Court Reporter’s Dilemma: Interrupt or Drop ,[1] California court reporting students must achieve a high level of proficiency and write 200 wpm to pass the stringent Certified Shorthand Reporter (CSR) licensing exam. Courses include English; legal and medical terminology; professional practices; government, state, and federal codes; ethics; and thousands of hours of stenographic machine training.

The Court Reporters Board of California (CRB), a bureau of the Department of Consumer Affairs, is the licensing and disciplinary body of all licensed CSRs, as the State Bar of California is for attorneys. Its mission is “to protect the public by ensuring the integrity of the judicial record and maintaining the standard of competency through oversight of the court reporting profession.” CRB’s Best Practice Pointer #1: How to Interrupt Proceedings [2] states: “The fundamental duty of a court reporter is to protect the record, including interrupting if the accuracy of the record is jeopardized.”

And issues with the “new normal” of remote video depositions due to COVID-19:

Attorneys have a duty to zealously represent their clients and make the record. Court reporters have a duty to diligently capture and protect the record. No reporter wants to interrupt but must stop reporting every time the record is compromised. Frustration is temporary, but transcripts are permanent!

This article was originally published by the Bar Association of San Francisco’s on its Legal by the Bay blog page and its print newsletter, Bulletin.

About the Author: Ana Fatima Costa, retired CSR/RPR, is a subject matter expert in the field of court reporting, court reporter advocate, published author, and speaker. Visit her website for more information. References: